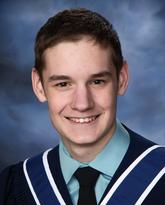 Elian is enrolled in the Schulich School of Engineering. He chose this program because of his love of designing things and seeing them come to life. The diversity of possibilities an engineering degree offers furthered his interest in joining this program. Elian hopes to work in in aerospace, particularly in the space industry. The possibilities in this excite him as he has a keen interest in space and the technologies used to get there.

Elian graduated from Our Lady of the Snows Catholic Academy in Canmore, AB. His top three achievements during high school were helping lead his schools synthetic biology team – which won the Chairman’s award at the 2018 International Genetically Engineered Machine Competition in Boston against 356 teams around the world, being selected for the two highest-sought Air Cadet scholarships – the Glider Pilot Scholarship and the Power Pilot Scholarship – where he earned two pilot licenses, and being recognized for having the highest GPA in his grade 11 year with distinctions in a handful of science-related courses.

The abundant culture of innovation and new technology drew Elian to the University of Calgary. This institution interested Elian because of the respected Engineering Program and the variety of student teams and organizations the university offers.

This award will allow Elian to focus more on his studies, as he will not have to worry about finances. It will also allow him to meet other academically minded students interested in making changes in the world. Elian is super excited to jump into his studies and cannot wait to see all the opportunities UCalgary offers!