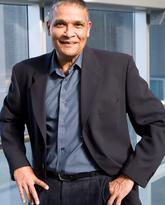 Dr. Chadee’s research projects are aimed at understand the mechanisms whereby infectious agents, lipid mediators of inflammation and cytokines modulate innate, immune and mucosal epithelial cell functions. Of particular interest to our group is the emerging concept that cross-talk between pathogen components and host cells or both, can predetermine the outcome of inflammatory or host defense mechanisms. Consistent with this concept, our program of research is divided into three areas as follows: 1. To define the biochemical and molecular interactions by which the mucosal pathogen, Entamoeba histolytica trophozoites or its components can modulate epithelial barrier function in the gut. 2. To determine the molecular mechanisms by which PGE2 regulates inflammatory gene expression and protein production in human colonic epithelial cells, and 3. To define the cellular and molecular basis by which E. histolytica virulent components (Gal-lectin and cysteine proteinases) can modulate innate host defenses.

His research is funded by:  NSERC, CCFC, CRC and CIHR.