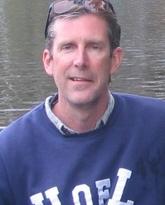 Dr. Goater is interested in the ecology and evolution of host-parasite interactions. He completed his B.Sc. (Zoology) at Brandon University, Manitoba in 1985 and his Ph.D. at the University of Exeter, England in 1990. Prior to his appointment at the University of Lethbridge in 1996, he completed post-doctoral fellowships at the University of Zurich in Switzerland and at the University of Alberta in Edmonton. His research roots lie in understanding the complex communities of gut parasites that are characteristic of freshwater and marine waterfowl. During his post-doctoral years, he shifted emphasis to empirical tests of parasite-induced effects on host and parasite performance, utilizing amphibian and fish model systems.

His current research focus combines empirical approaches in the lab and field, with field-based monitoring and molecular and earth-science tools to test hypotheses regarding the nature of the complex ecological interactions that occur between hosts and their parasites. In his parasite-centred focus, he is interested in how natural selection shapes patterns of parasite growth, development, reproduction, and life-histories. In his host-centred focus, he seeks to understand the nature of parasite-induced effects on host individuals and host populations and to determine how such effects impact the evolution of their hosts. Current focus is on model systems that are amenable to experimental manipulation in the lab and field, including larval trematodes that encyst in minnows, larval trematodes that encyst in ants, adult liver flukes of grazing mammals, and an emerging virus of western tiger salamanders.