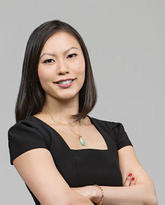 Wilma Shim is a lawyer with Alberta Justice and Solicitor General. In 2003, she was awarded the Chancellor's Club Scholarship. While a student at the University of Calgary, Wilma was elected to the Students’ Union and elected the president of the Society of Law Students. She has previously served as the president of the Physical Education and Kinesiology Alumni Association.

In 2010, she received the President's Award for Excellence in Student Leadership and was also inducted into The Order of the University of Calgary. Currently, Wilma is chair of the Board of Directors for Special Olympics Alberta and is a director on the Board of the Association of Women Lawyers. She is a volunteer coach with Special Olympics Calgary. Wilma is an instructor with the Law School’s Trial Advocacy Course and volunteers as a guest judge. She is a member of Avenue Magazine’s Top 40 under 40 Class of 2015.