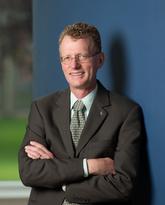 Gijs is an inventor on 24 issued patents and a co-founder on two technology companies.   From 1997 to 2006, he was an Adjunct Professor at the University of Calgary where he delivered guest lectures on a variety of topics including plant biotechnology, project management and legal/ethical considerations around genomics research.

He held a number a number of volunteer positions including 3 years as President of the Dutch Canadian Business Club of Calgary. He is serving as a mentor and judge for U of C’s Masters of Biomedical Technology programme and has been a Calgary Youth Science Fair judge for 20 years. He has been married for 27 years and has three daughters, each with a strong connection to the U of C as part-time swim instructor/lifeguard, former Biochemistry student and current Finance student at the Haskayne School of Business respectively. He enjoys hiking, camping and cross-country skiing and exploring old European cities and countries on foot.