Government officials? Yes. But a priest? That’s one of the most unlikely people you’d expect to come to Alberta to talk oil and gas with the University of Calgary’s School of Public Policy.

Yet when a group of officials from the Kenyan government visited the School recently to learn about oil and gas regulation and community consultation, they were accompanied by a priest named Father Augustine.

“The church could be a key partner if they’re supportive of the development or could pose challenges if they don’t support development,” says Deborah Archibald, a geologist and director of the School of Public Policy’s Extractive Resource Governance program (ERGP).

“Father Augustine is a community liaison there,” she adds, and given the fact that he accompanied the others — mostly officials with Kenya’s ministry of petroleum — she thinks the church is supportive.

“He seemed amenable to all this,” Archibald says. “This” refers to the building of a US$1-billion, 821-kilometre pipeline that will carry about 80,000 barrels of oil a day from northern Kenya’s Lokichar oilfields to the Lamu seaport, for export overseas. The pipeline is expected to be fully flowing by late 2023.

They’ve had a major discovery of oil in the northwest corner of the country, but they have no oil and gas regulator. There’s a potential opportunity for us to provide them with advice.

Oil was discovered in the Lokichar basin in 2012, and estimates are that the basin holds 560 million barrels in proven and probable reserves.

The Kenyans spent a whirlwind four days in Calgary, and in spite of jet lag — there’s a nine-hour time difference — managed to accomplish a lot. Among other activities, they attended ERGP courses, visited SAIT to look at labs for training people to work in oil and gas facilities, and even had time to meet with a provincial government official to learn about dispute resolution with landowners over access to their land.

“What stood out for them was community consultation. The other takeaway was they’ve got some good ideas on competencies they need for their regulator and how they might structure or design their oil and gas regulator,” Archibald says. “Their big challenge is how they meet capacity, the technological positions, the people who know the oil and gas industry.”

The government of Kenya has enacted legislation to ensure resource revenue sharing with the communities impacted by oilfield production. “The federal government will keep 75 per cent of the royalties, the county government (similar to a Canadian province) will keep 20 per cent, and the communities in the vicinity will get five per cent. They have not yet decided how that five per cent will be spent,” Archibald says.

The people in those remote communities are looking to attain a greater level of prosperity. Archibald says the residents “don’t have many opportunities for economic development on the scale that oil and gas will bring.”

As with many other ERGP consulting projects, the department’s relationship with Kenya is an ongoing one. “We started a conversation as far back as November 2017. In addition, several of their departments have been here on fact-finding missions; their national oil company has been here. So this is part of a potential business opportunity for us,” she says.

The next step will be to send the Kenyans a proposal for work in which ERGP can provide support. The pipeline represents a partnership between the government of Kenya and the Kenya Joint Venture, made up of Tullow, Africa Oil and Total.  Since it’s a major part of the US$25-million Lamu Port-South Sudan-Ethiopia Transport Corridor project, stakeholders hope the pipeline will be an economic game-changer for the six counties it traverses.

“The pipeline’s purpose is to get the oil to the coast and transfer it to tankers for export. There are no plans to refine it within Kenya,” Archibald says. However, neighbouring Uganda has just built a new refinery and there’s a potential for some of the product to go there, be refined and then shipped back to Kenya for use within the country.

It hasn’t all been smooth sailing. Last spring, a Kenyan court ordered a temporary halt on land purchases for oil exploration and production in Turkana province, which is home to the nomadic Turkana tribe.

“It is likely that land disputes will always be there,” Archibald says. “Turkanas are pastoralists that need community land to graze cattle. Finding common ground between that traditional way of life and the emerging oil industry has proved to be difficult, particularly when the local population has yet to see the much-awaited revenues from oil.”

Meanwhile, ERGP staff are keeping busy elsewhere around the globe. They’re in year two of a five-year project in Mexico, and Panama has asked them to submit a proposal for training that will carry them through next year. They also recently received a request from the World Bank to submit a full proposal for consultation work in Mozambique.

“There’s always something in the hopper,” Archibald says.

UCalgary promotes its expertise in sickle cell disease, helping families around the world 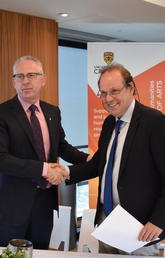