Southern Alberta’s Writing-on-Stone Provincial Park is a space that holds hundreds if not thousands of petroglyphs and rock paintings drawn over centuries that depict the history of the area before and after European settlers came to the land.

In late summer, the air is still and hot and dry, the ground dusty. Signs that warn of rattlesnakes are not there simply for the amusement of tourists. It’s most definitely a rugged space, and not one to be traversed lightly.

That said, the public is welcome to visit Writing-on-Stone, about 130 kilometres south of Lethbridge, to wander the land, to see the rock work, to ford the somewhat cold and cloudy Milk River (there is no bridge for crossing), and to visit the long-abandoned North West Mounted Police Fort that sits on the south bank, opposite the carved rock faces.

But one low ridge to the west, a traveler ventures into restricted land.

Some of the carvings on the rock walls are hundreds of years old.

Opening the door to a new, old world

The land is off-limits because it is considered sacred. It’s a very personal place, a space where, for thousands of years, the Blackfoot people have lived and worked, celebrated and mourned — a place for worshipping and a place that is worshipped.

At the beginning of the school year, students from the Werklund School of Education at the University of Calgary were invited to explore this sacred space, welcomed in by Blackfoot Elder Randy Bottle.

Elder Bottle leads groups into this restricted land, opening doors for others to learn what the Blackfoot people have known for centuries. He shares stories of his people, their history and the connection to the land. “The land does speak to you,” says Elder Bottle. “You just have to listen and to be very observant.”

The two dozen students, all pre-service teachers, were accompanied by a handful of instructors who specialize in Indigenous education. Over the course of two days and two nights, guided by the elder, they were encouraged to explore and learn more about the significance of the land to the Blackfoot people. They floated in the river, hiked to nearby hoodoos, shared meals, and in the evenings, they camped in small tents on the banks of the river, listening to the sounds of nature under the shadows created by the full harvest moon.

“Everything we need comes from the land and that’s where all the lessons come from,” continues the elder. “Mother Earth (Na’a) is very important because we ask Mother Earth to embrace us just like our mothers and that’s how we survive on the land.”

An optional activity for the Werklund School undergrads to learn more about Indigenous ways of knowing and learning, it’s the first time the program like this has been offered to UCalgary students. Additional visits to local reserves and service organizations rounded out the place-based learning  program.

Students and faculty set up camp on the banks of the Milk River.

Their day-long hike across the coulees, onto and through scared land, would not have been possible if the elder had not made the invitation. The chances of something like this happening a decade ago would have been very unlikely.

With findings of the Truth and Reconciliation Commission of Canada and its Calls to Action just a few years ago — and a new focus on building bridges between cultures where in the past there were barriers — the critical steps are being taken to develop educational curriculum that address topics such as, in the report’s recommendations, “residential schools, treaties, and Aboriginal peoples’ historical and contemporary contributions to Canada” for children in the K-12 system.

Says the elder, “I think that shift is beginning to take place where in the past there was a lot of focus on the negative impact of history with our people.”

“Before this area was ever settled we had a very structured lifestyle and we survived on the land but our people did not just go out and hunt buffalo on the prairies; they were actually professionals themselves.  They were engineers and mathematicians and health-care providers.”

By involving pre-service teachers in a learning environment such as the one experienced by the Werklund School students, a cycle is being created where the teachers in tomorrow’s classrooms can enter with new knowledge about what came before and the possibilities for taking the dialogue to the next level.

The University of Calgary unveiled its Indigenous Strategy, ii' taa' poh' to' p, on Nov. 16. The strategy is the result of nearly two years of community dialogue and campus engagement, and involved the work of a number of people from the university, Indigenous communities and community stakeholders. Recommendations from the strategy will be implemented in the coming weeks, months and years as we move forward with promise, hope and caring for the future.

At the beginning of their camping trip to Writing-on-Stone, the students and their teachers gathered in a circle, introduced themselves and talked about why they had asked to be included. On their final morning in the park, as the sun rose and burned the mist off the river, the group took a moment to reflect on their experiences.

The students joined their instructors and Elder Bottle in a sharing circle once again to talk about what they learned, how their perspectives and perceptions had changed, and what they would take with them moving forward, in a good way:

“In the moments of silence, I found it was the deepest way to connect to the land for myself, when I was just listening to the wind and the grass … the more I listened the more I saw — as if listening was the beginning of the witnessing.”

“It’s one thing to read about Indigenous culture in books, but it’s a whole other thing to be in the space and to learn from someone who is as knowledgeable as Elder Bottle.”

“The first thing that I witnessed is that we are truly all students … continuously learning — even Elder Randy mentioned that he’s learning new things all the time … whether that’s learning how to cross a river with confidence or respecting the petroglyphs and the pictographs and taking away from that a meaning of your own.”

“This space is so sacred and you can just feel it.  I loved being here and opening up my own heart and my own mind to all the teaching that (Elder Bottle) shared.”

By listening to, and learning from the land, guided by an elder, and by living the experience, the students gained a better understanding of the deep meaning of the role that nature and the land itself plays in the Blackfoot culture — and  in their own lives and teaching practices as well. 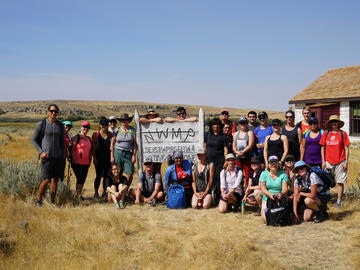 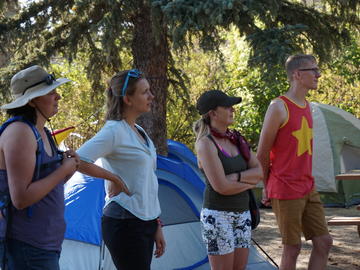 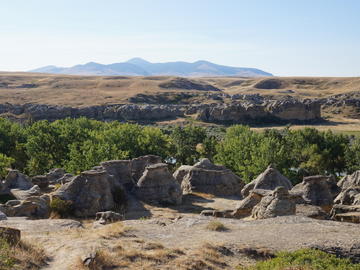 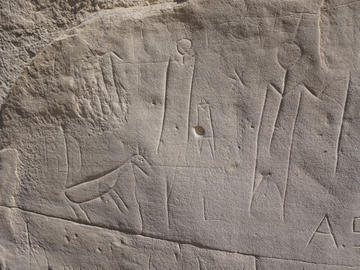 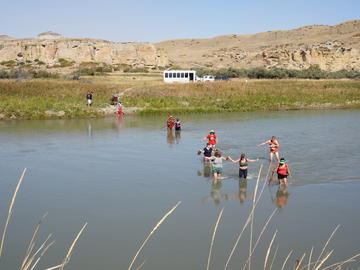 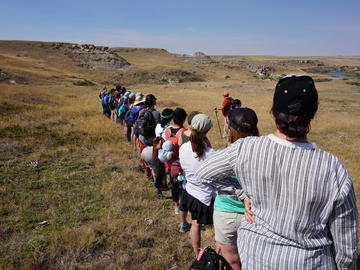