Kelly Hofer, for the Haskayne School of Business

Alberta’s economic success has been based on energy. Oil and gas has been one of the primary economic drivers of the province’s economy. The key to Alberta’s economic diversification may be another form of energy, cheap and abundant electric power that can supply a number of industries that have high demands for power.

“The number one competitive advantage you can have is low cost. Alberta right now has the chance to be the low-cost electricity provider in the world. Period,” says Sean Collins, president, Terrapin. Terrapin is a three-year-old venture focused on renewable energy, but not in the forms most consumers think of such as solar, wind or hydro. Terrapin converts heat to power, developing baseload emission-free sources of electricity. 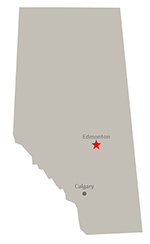 “We were a part of the first cohort of CDL-Rockies,” says Collins. “That process helped us significantly as we were trying to understand the best go-to-market strategy, what the right package and offering was to allow us to be a successful company.”

Terrapin came into Creative Destruction Lab Rockies (CDL-Rockies), with a focus on geothermal energy. By the time they graduated from the demanding nine-month program, they had expanded their offering to include waste-heat-to-power for heavy industrial facilities.

“We now have active projects going at a metals facility in the industrial heartland, a compressor station project in northwest Alberta, and we are expecting to be able to make some major announcements about a major geothermal project we have been developing in NW Alberta,” says Collins.

Creative Destruction Lab Rockies enables innovation in Alberta and beyond

CDL-Rockies, located at UCalgary’s Haskayne School of Business, is a seed-stage program for massively scalable, science-based companies. Following its first cohort of ventures in 2017-18, it expanded into two streams, Prime and Energy, for 2018-19.

Ventures in the program have access to the CDL network of mentors, the fellows and associates. One of the mentors who worked with Terrapin was Mike Begin, director and former chair, president and CEO – Spartan Controls.

“To have someone who has been in various senior positions and led a very successfully managed company with such highly regarded customer service and values — it has been one of the most impactful things that has happened to us in our history of the company,” says Collins. “I spent eight to 10 hours a month with Mike over the course of CDL.”

“I cannot stress enough the value of the CDL network for a new entrepreneur,” says Alice Reimer, site lead, CDL-Rockies. “It would be next to impossible for a new venture to gain access to industry leaders who have started and scaled massive businesses. At CDL, the fellows and associates share their hard-learned lessons and their connections to corporate partners for pilots and customer discovery.”

Beyond Alberta, Terrapin has been engaged on project opportunities in B.C., Saskatchewan, Texas and California. With experience in the still nascent regulatory and development process, Terrapin is already exporting its energy expertise.

“Alberta has, without a shadow of a doubt, all the skill sets and expertise and infrastructure and service and supply industry required to be successful in the geothermal industry,” says Collins, although he highlights that one of the biggest challenges has been shifting the investment mindset. Many investors are familiar with the 12- to 18-month paybacks in oil and gas. Investments in electric power provide stable income, lower risk but a longer payback period.

Ventures from around the world applied to secure a spot in the 2018-19 cohort of CDL-Rockies. There were 251 applications for the spots in the Energy and Prime streams, including ventures from the United States, South America, Europe and India.

CDL-Rockies was established through the university’s ongoing fundraising campaign, Energize: The Campaign for Eyes High, which is targeting $1.3 billion in support by 2020. The campaign, currently at more than 95 per cent of its overall goal, is helping the university invest in new student experiences, innovation in teaching and learning, and fostering deeper connections with the university.