Kate Thompson appointed to lead a passionate team of placemakers

The School of Architecture, Planning and Landscape (SAPL) is proud to share CMLC's recent announcement that Kate Thompson (MArch'02) will be the new President & CEO of the Calgary Municipal Land Corporation (CMLC).

Kate's career spans a number of architecture firms and she's been with CMLC for seven years. She was a founding member of of the SAPL Dean's Circle, and continues to be actively engaged with her alma mater as an adjunct professor and mentor to students and young graduates as they begin their careers. She is the board chair of YWCA Calgary, which recently opened the YW Calgary Hub. In her private life, she's also a dedicated mom, wife, daughter, and friend.

Kate is a true inspiration, and her vision was instrumental to the launch of the City Building Design Lab (CBDLab), a research hub for SAPL that connects students with community, facilitates partnerships and research impact, and invites citizens into a new home for exhibitions and conversations around city building.

Kate Thompson with Dustin Couzens at a SAPL design review

As a Design Matters guest speaker in October 2019, she spoke a lot about the notion of corporation in the sense of cooperation. “Who wants to be on the team is just as important as who’s chosen to be on the team,” she said. “The right team sometimes begins by asking the hard questions and questioning the current standards of a good solution to create a better solution.”

And now she's been chosen to lead the team who will be transforming the Rivers District.

In the News: Calgary Herald 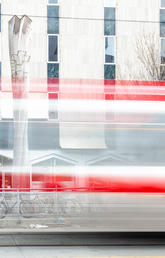 Professor named one of YW Calgary's She Who Dares Award Winners

In the News: The Calgary Herald

Police commissioner says Alberta should look at other models of oversight