Skip to main content
Flags lowered on UCalgary campus, following the announcement Sept. 8 of the passing of Queen Elizabeth II.

It is with great sadness the University of Calgary joins the world in mourning the loss of Her late Majesty, Queen Elizabeth II. For 70 years, the Queen dedicated her life to the service of others.

As head of state, she presided over some of the most significant moments in Canadian history, including the repatriation of Canada’s constitution and the signing of the Charter of Rights and Freedoms in 1982. She also briefly visited UCalgary in 1990 when she inspected regiments at McMahon Stadium.

Through her many tours of Canada and as the Canadian head of state in the special treaty and rights relationships between the Crown and Indigenous peoples, she embraced the uniqueness of our country and its people, cultivating enduring ties while connecting with different cultures and traditions.

The world has changed so much since Queen Elizabeth took the throne in 1952. Her steadfastness, her selflessness, and her commitment to service never wavered. It is hard to imagine a world without her in it. 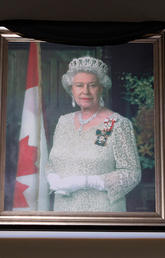 Photo retrospective: Over her reign, Queen Elizabeth II visited Calgary and area a number of times