No one saw it coming. That was one of the most painful truths for the many who loved 20-year-old University of Calgary drama student Michael Brendan Fischer-Summers in the days, weeks and months that followed his Sept. 11, 2017, suicide.

His mother, Brenda Fischer, now believes he suffered from what is known as “smiling depression” — appearing happy to others while silently struggling inside. She spent quality time with her son the day before he died — a fun Sunday afternoon making stuffed vegan peppers — and she saw no signs of the talented young actor’s anguish. Nor did Michael’s classmates, who were deeply impacted by the loss.

“It was devastating and so hard to fathom because there were no red flags,” recalls Valerie Campbell, an associate drama professor in UCalgary’s School of Creative and Performing Arts (SCPA). “It made us worry about our other students. Everyone went into high alert; it changed the culture of the Drama Division.”

But the tragedy motivated the Fischer family and the SCPA’s drama division to create a positive and lasting legacy in Michael’s memory.

It started with the Week of Kindness. Initiated by the Drama Undergraduate Society (DUS) and first held the last week of January 2018 (coinciding with Michael’s birthday on Jan. 27), students started a “compliment board” where they could leave messages of gratitude and encouragement for their fellow students, as well as for their teachers. The drama students also gave out free coffees on campus and prepared sandwiches and collected clothing for a homeless shelter, among other charitable deeds.

This was a fitting tribute to Michael, who was well known for his good nature.

“From the time he was a little boy, he was the child who came home with the niceness award, the compassionate kid award,” says his mother. “He was the first openly gay student in a rural Alberta high school, so he got shoved into his share of lockers, but he was never jaded by this and he always walked his walk. He remained good and kind.

“When our family met his classmates, they told us the same. They talked about how gracious he was. How supportive he had been to his fellow students, as a role model and a mentor, always working with those actors who needed help in their roles.”

Giving back to the School of Creative and Performing Arts

Brenda was deeply touched by the DUS Week of Kindness initiative and she sought to give back to the SCPA drama division Michael so cherished in a way that would build upon his spirit of generosity. On Giving Day last year, a donation from Brenda established the Michael Brendan Fischer-Summers Award in Kindness, an endowed cash award that goes to a fourth-year drama student who exhibits not only talent in their field, but also the essence of kindness and giving that Michael embodied.

The first recipient of this award — given out this year after the second-annual Week of Kindness — was Nicole Logan, former president of the DUS, whose leadership style, says Campbell, is one of “caring and inclusivity.” Logan was one of the main instigators of the Week of Kindness and helped organize many of its related events.

“I ran for the DUS because I really care for everyone in the drama division,” Logan says. “If people recognize my work as selfless and that inspires them, that makes me proud. Michael was just a great guy to be around — never negative, always spreading positivity — and to win this Kindness Award in his name is a special honour.”

The cash value of the award this year was $800 and it is Brenda’s intention to raise more money for the endowment so that it can also be granted to third- and fifth-year drama students. This year on Giving Day, it’s expected that plans to expand the award will be announced.

Goal to make the world a better place

“One thing we built into the award was the notion of making the world a better place,” says Brenda. “We asked that the selection committee think about how the students being considered carry themselves every day. How do they treat minorities, members of the opposite sex, gay and transgender people? I wanted the award to reflect the winning student’s talent, but also their hearts.”

It’s a quality that makes the Michael Brendan Fischer-Summers Award in Kindness quite unique among gifts for academic achievement, Campbell notes.

Brenda adds the emergence of the MeToo movement shortly after her son’s death was another motivator in fashioning the award. “I knew this was something Michael would have been passionate about because he prided himself on being a feminist and this was so central to that,” she says. “Issues of social injustice were important to him and, for me, this spoke to his kindness and compassion. Especially as an actor, he would have been horrified by the idea of manipulative directors and poor actresses having to sell themselves on a casting couch.”

At a time when the acting world seems so tarnished in the wake of Harvey Weinstein, Brenda feels the Kindness Award helps bring much-needed positive encouragement to the young actors in the drama division.

“The award and the Week of Kindness is Michael’s legacy and it’s something he would have been so proud of,” she says.

April 25 is the third annual UCalgary Giving Day, a 24-hour fundraising and awareness campaign that supports research and students. With a goal to raise $1 million before midnight, Giving Day gives our community the opportunity to donate to any area they’re passionate about.

The University of Calgary, through our Campus Mental Health Strategy introduced in 2015, has committed to fostering a campus culture where students, faculty, and staff are valued, included, and flourishing — a place where those who are in pain, lonely or in distress feel connected and supported. As a mental health-promoting campus, UCalgary supports diverse, vulnerable, marginalized, and at-risk populations to develop a more inclusive campus community supporting positive mental health. We have developed initiatives such as partnering with the Distress Centre and Wood’s Homes to provide 24-hour support, seven days a week, and have expanded anti-stigma initiatives and peer support resources to promote acceptance and responsiveness to those in distress. 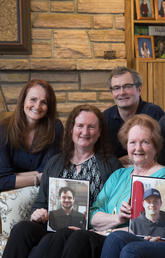