Skip to main content
From the new Summit attraction to Times Square, the High Line, dive bars and the buskers in Central Park — NYC is back.

Not since pre-COVID, when 66 million holidaymakers visited New York City, has business been as good

The buskers on the High Line are out, the Met and the MOMA are heaving; Summit influencers are smiling; and good luck if you want cheap tickets to Hamilton. Travel, it seems, is no longer just about ‘going somewhere.’ Having endured two+ years of constraints and limitations, who doesn’t want to wring every bit of richness and meaning out of their next trip?

In other words, I thought, let’s jam a getaway with everything we’ve missed since March 2020. Theatre, music, galleries, dining out — precisely why New York City rocketed to the top of our list for a supersized escape. Turns out we weren’t alone as some 712,000 Canadians are predicted to visit the Big Apple in 2022, up from 220,000 in 2021, according to NYC & Company, the city’s tourism promotion agency which is currently forecasting a 70 per cent bump in overall tourism numbers from last year.

After combing through umpteen tourism websites and social feeds (thank you friends), we thought we’d reach out to a few alumni who call NYC their home — and let them be our guides. What follows is some local intel spliced with my end-of-May holiday. Herewith:

For a bit of perspective, Prof. Rick Churchill, PhD, of the mathematics faculty of the City University of New York, who worked at UCalgary, in the ‘70s, sums it up . . .  wryly: “You come to NY to see the Metropolitan Museum of Art (which is slightly bigger than the Glenbow), the Natural History Museum (which is slightly bigger than the Nature Museum in Banff), Lincoln Center to see the Metropolitan Opera, Ballet, etc. (also, just slightly bigger than the Jubilee), the Museum of Modern Art, the Empire State Building, the Bronx Zoo, Brooklyn’s Botanic Gardens (although the one in Calgary is pretty darn good), the Guggenheim Museum, the Cloisters (which is a real gem that many know nothing about), South Street Seaport, Coney Island. And then, following breakfast, you can take in Yankee Stadium, Madison Square Garden, Wall Street, the Strand Bookstore, etc.!”

Benny Wong, BComm’04, who works in the energy equity research division at Morgan Stanley, lived in New York for a decade. Although he left last year, he still recalls a perfect day: brunch at either Buvette or Laduree Soho followed by dinner at Misi (we followed his advice and went to this uber-hipster spot near the Williamsburg Bridge, helmed by one of James Beard’s anointed chefs, Missy Robbins, where we learned what “ramps” are) or Quality Bistro. In between noshing would be an amble along the High Line (an elevated rail line-turned urban park running through the old meat-packing district). And he’ll be back for Hugh Jackman’s Music Man that recently opened on Broadway.

Art History major Enrique Crame III, BA’02, along with, Matt Fox, own a bolthole of a boutique in midtown Manhattan, called Fine and Dandy. Crammed with ascots, top hats, bowties and stacks of vintage clothing Crame has lived in NYC for 16 years.

Art History major Enrique Crame III, BA’02, with his partner, Matt Fox, own a bolthole of a boutique in midtown Manhattan, called Fine and Dandy. Crammed with ascots, top hats, bowties and stacks of vintage clothing Crame has lived in NYC for 16 years and figures “the streets of New York make the best runway in the world. People have style like no place else.” Every Monday night, he goes to the legendary jazz club, Birdland, for an event called Cast Party: “It’s an open mic night for the Broadway/jazz/cabaret community and is sooo much fun.” When “the greatest city on earth gets to be a little too intense,” Crame escapes to the pathway system along the Hudson River, “where the city has turned the piers into parks and other recreation areas. It’s an oasis in this crazy city.” A theatregoer, Crame intends to see A Strange Loop which he predicts “will likely win the Tony for Best Musical.” Doubly sweet was when he spied the musical’s lead, Jaquel Spivey (who also just got a nod for a Tony), wearing one of Fine and Dandy’s ascots to the Met Gala last month.

You can burn through a lot of cash in Manhattan which is why, Ian Chiclo’s, BA’91, advice prompted high-fives from my husband and me. Just down from Fine and Dandy, in Hell’s Kitchen, is one of Chiclo’s favourite spots — Rudy’s Bar and Grill, a much-beloved dive bar. Pitchers of beer are a confusingly cheap $12 and that includes free hot dogs, dim lights and tchotchkes galore. Look for the pink shiny pig outside and then belly up to the bar where you’ll rub shoulders with friendly locals, tourists and those seeking a break from NYC’s nutty prices which can easily run you $20 for a glass of plonk (that’s U.S.) or $23+ for a cocktail.

Chiclo, a board member with the UCalgary Alumni Association, also suggested going to a speakeasy — Please Don’t Tell tops his list and, it turns out, many other alumni said ditto to this primo pick. Access is through an East Village phonebooth and a hot dog joint (Crif Dogs) and the head mixologist Jim Meehan is said to have whomped up some 200 original cocktails. But don’t leave it until you arrive, like we did, as PDT was fully booked, so we kept snapping up tickets to plays and musicals. Fun fact: During Prohibition, it’s believed there were 24,000 speakeasies in NYC.

Speaking of plays and musicals, I found the best apps for Broadway deals were Today’s Tix and Seat Geek, although I looked assiduously on the site, BroadwayForBrokePeople, hoping to nab tickets to Hamilton, as well as through NYC’s lottery system but didn’t get lucky. That said, Hadestown, Come from Away, Little Girl Blue, Six and Hangmen were all outstanding and didn’t require me to queue up in the ridiculously crowded Times Square. Some plays, such as Little Girl Blue (the story of musical icon and civil rights activist Nina Simone) have a 20-for-20 program, meaning you can get a ticket for $20, some 20 minutes before opening. 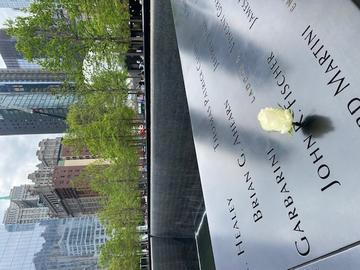 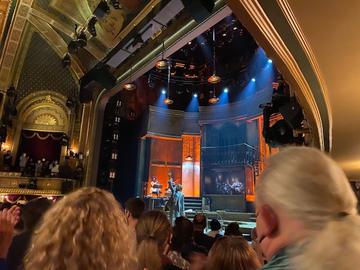 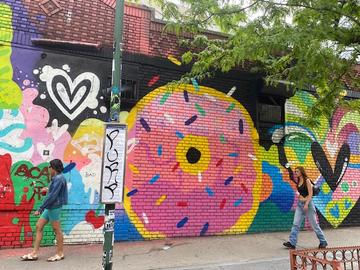 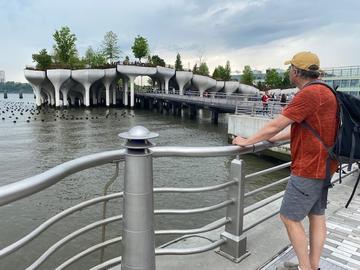 Other deals: NYC’s bike-share program, a.k.a. Citi Bike, is superlative. Sure, some docking stations might be full, but, for $15 a day you can ride to so many places in less than 30 minutes (if you exceed that you must pay $4 for an extra 15 minutes) and you’ll see so much more than on a subway (if you opt for the underground, buy a MetroCard or an OMNY pass and save $$).

Of course, the most stress-free cycling is through Central Park (be sure to stop in Strawberry Fields and listen to buskers pay tribute to John Lennon who was murdered nearby in front of his apartment building, the Dakota) and linger at the bridge near the boathouse where the acoustics are superb. Gardens, dozens of playgrounds, lakes (with turtles), fountains, a literary walk, and statues galore make for a glorious spin. As does the 18-km uninterrupted route next to the Hudson River which can zip you south from the Bronx to Battery Park, depositing you next to the free Staten Ferry (the closest you’ll get to the Statue of Liberty), which just happens to be mere blocks away from the 9/11 Memorial. We paid for a walking tour of this area which is how I learned St. Paul’s Chapel (built in 1766 and only feet away from the former towers) was saved by a falling sycamore tree (its wrought-iron fences served as message boards for victims, firefighters and, really, the world, for a year after Sept. 11); how the trees which stand today in the 9/11 Memorial symbolize resilience (including a graft taken from a tree outside of Anne Frank’s home in Amsterdam); and why the new One World Trade Center tower is 1,766 ft. tall (America’s Declaration of Independence from British rule) — but you can walk through this sobering area and the Oculus for free, if you wish.

Definitely not free, or cheap (apart from Rudy’s), some culinary gems include: Brunch in Harlem at the legendary Red Rooster (accompanied by remarkably talented live gospel/soul musicians who are students from a nearby college); lunch at the timepiece-of-a-deli Barney Greengrass (try the latkes, followed by sturgeon or pastrami-lox on a chewy bagel); Café Colette in Williamsburg (most entrees were less than $22 and it has a casual vibe, strong cocktails and you can take a ferry back to Manhattan and be dazzled by the bright lights); Levain Bakery for dreamy chocolate chip/walnut cookies; snacks from Trader Joe’s; and hearty salads from Sweetgreen.

It's not the most famous of galleries, but, for me, the Brooklyn Museum was the biggest surprise. Its permanent collection has some gems — the iconic and deeply moving, feminist artwork The Dinner Party by Judy Chicago is on the fourth floor, but its counterpoints to traditional perspectives are told over and over again in what I discovered is NYC’s third-largest (and free) museum. Also new to me was the Starrett-Lehigh Building in Chelsea, occupied right now by 200 works and vignettes of Jean-Michel Basquiat’s life, curated by his two sisters. Some 177 of these artworks and artifacts have never been seen before and are arranged chronologically so you leave with a very detailed personal portrait of Basquiat’s development at a time when the artist’s market value continues to soar.  From raw doodles and scribbles to report cards, his signature trench coat, old family movies and a recreated family dining room, the presentation of this immersive exhibit leaves you with insight into the inner workings of Basquiat’s creative process and his inspirations.

Art Beyond the Met and MOMA 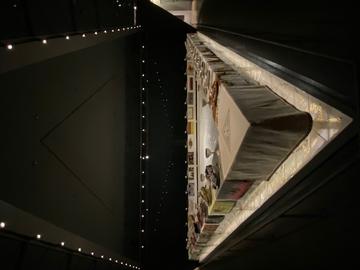 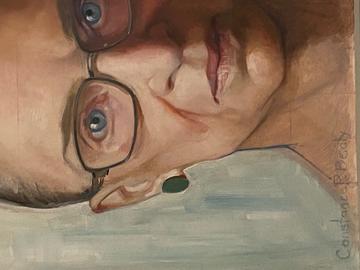 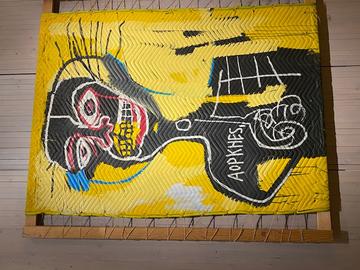 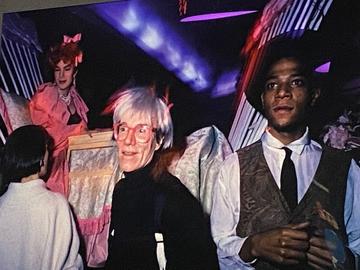 Not a museum, but one of Manhattan’s latest and trippiest attractions is Summit. Beloved by Instagrammers, it’s a futuristic twist on Versailles’ hall of mirrors, but located 91 storeys above New York’s spiky skyline. Go to this glassy observation deck at night and you’ll leave dazzled by the Chrysler Building, the Empire State Building and the hundreds of other skyscrapers that sparkle and wink below your feet. Although you’ve seen these jaw-dropping views in so many movies, never have they been fractured by mirrors, reflective balloons and glass floors. Rather than spend the extra $20 to take an elevator up another four stories where the views don’t change that much, spend it on a tipple at Summit’s outdoor patio, 324 metres above Grand Central Terminal.

In other words, come for the intellectual and emotional jab of a metropolitan adventure; stay for the playful wonder of it all. New York City is back.

Tips: If you can book a direct flight and avoid Toronto's Pearson Airport, do. These days, delays and cancellations at Pearson are numerous as they struggle to get back to pre-COVID schedules and systems. When in NYC, travellers should know that masks are mandated at all plays and musicals, on and off Broadway, and are strongly recommended on subways, museums, galleries and in other indoor spaces. Vaccine passports are required at certain restaurants, i.e. Miso, but not all. 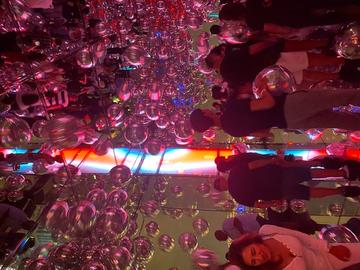 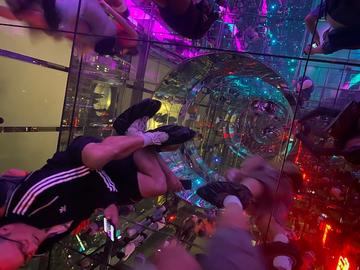 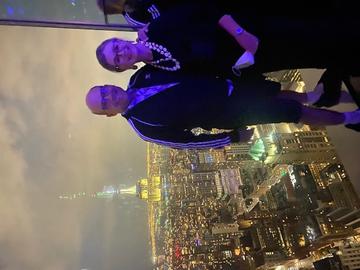 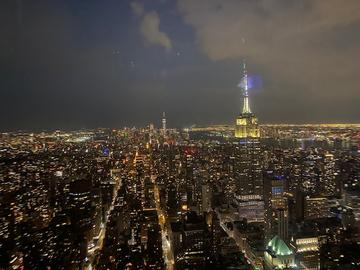