Student Exchange with the Japan Foundation

Six weeks in Osaka thanks to the Japan Foundation

In the summer of 2016 I received an amazing opportunity from the Japan Foundation, that of studying Japanese in Japan on a six-week fully funded trip. Along with 37 other students from 37 other universities across 16 countries, I fell in love with Japan all over again (I had been there once previously) in the quaint Rinku Town, a train ride away from the big city of Osaka and at the doorstep of the Osaka Bay. If it sounds like something out of a dream, you’re not far off! My experience there was once-in-a-lifetime and I know I will treasure the memories I made there for years and years to come. The language, the tradition, the people, the beauty, and so much more took my breath away every day I was there.

So what happened there? The experiences were numerous, but I’ll highlight some here for you. First, there was the language experiences. With students from so many different countries, English was hardly the go-to, which meant everyone strived to communicate in Japanese despite our varying levels. From our simple jikoshoukai (self-introduction) to planning full on self-catered birthday parties we persevered. Of course, there were also the classes, but they weren’t the same old thing at all. From discussing our ideal marriage and the economy in Japan in small class settings, to interviewing actual Japanese people and presenting our findings, we used our Japanese in ways we would normally never bother. We even learned Kansai-ben (the dialect of the Osaka region) and young-people-slang from real Japanese university students aiming to be teachers themselves one day. And lo-and-behold, through our hard work we all improved dramatically! Despite any language barriers we had, we managed to make what I hope to be lifelong friends.

Of course there was much more to this trip than just language practice, as beneficial as that was. I was also able to truly experience Japanese culture and their way of life through various traditional activities among other things. Kimonos, taiko (Japanese drum), flower arranging, tea ceremony, calligraphy, and an aikido-jujitsu combination class showed off the vitality of historic Japan in the modern day. We were all allowed to participate in up to three of these exciting specialized classes. As well, my classmates and I had the chance to visit several major places in the kansai area. From crawling through the nose of Buddha in Nara, to staying at a picturesque ryokan (traditional Japanese inn) in Kyoto every place was its own unique adventure. To top it off, we were also able to spend an evening with a Japanese family in the community with a couple other classmates. My beautifully kind and generous family offered us a night of mouthwatering homemade food, nagashi soumen, origami, fireworks, and warm company.

There are many more things I could account, the embarrassment of silly mistakes and the ensuing laughter, figuring out the complicated train systems, a personal trip to Kobe with friends, matsuri (Japanese festival), fireworks and star watching by the sea, karaoke, trips to the beach, the dear friends I made, the list is endless. The party on the last day left many of us in tears as we recounted the fond memories we had made, yet we continued to smile and enjoy our last while together for the time being. I am extremely grateful to the Japan Foundation for giving me this opportunity as it is gave me experiences that I will surely draw on throughout my lifetime.

Student Exchange with the Japan Foundation 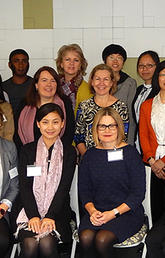