Darin Flynn is teaching a new course on rap linguistics, named one of the coolest classes in Canada.

Whether you love rap music or loathe it, spend any time talking about the genre with Darin Flynn and you’re bound to walk away with some level of appreciation for the art form and its impact on language.

Flynn, an associate professor in the Department of Linguistics, Languages and Cultures, is teaching a new course on rap linguistics — which was named one of the “coolest classes in Canada” in a recent Huffington Post story — and his passion for the topic is infectious.

Of course, a cynic might look on the course with a suspicious eye. Rap is, after all, a pop genre with a certain stigma attached to it, often associated with crude lyrics focused on themes of crime, violence, ill-gotten lucre and misogyny. Is it worth our time in a scholarly setting?

You better believe it, argues Flynn.

“As linguists, we seek to understand language as it is, not as it should be,” he points out. “We study the ways in which people actually speak. And rap is important, because it gives us a window into how people really talk in working-class environments, in both black and white communities.”

Flynn also rejects the notion that rap is a shallow, unsophisticated musical style. Rather, he feels, when the genre is at its best, “it treats the listeners quite respectfully.

“These songs crisscross sound, emotion, grammar and multiple metaphors in such a rich way,” Flynn says. “Only a true poet laureate of the working class, like Eminem or Jay-Z, could achieve that.”

He adds: “I think poetry is very much alive today, and it’s found in rap music, in the so-called gutter. Rap is the language of the gutter.”

The undergraduate rap linguistics course is not for first-year linguistics students, generally speaking. Classes in phonology and syntax — in other words, sound and grammar — are a prerequisite. “Students have to come in knowing how language works,” Flynn says. However, he’s willing to waive prerequisites for students who have a background that could enrich the class in some way. A degree in poetry, music, psychology or sociology might open the door, for example.

Flynn plans to have each student focus on a specific rapper in the class. “I want them to connect their MC’s body of work to whatever we’re studying in class on any given day, be it psycholinguistics, sociolinguistics or phonetics,” he says.

The class will also take on a global bent, examining rap from cultures as diverse as German, French, Navajo and even the Sami people of Northern Europe. Students will be fascinated to learn the ways in which different languages adopt different rhythms, all of which impacts the style of rappers in various regions.

Flynn feels that the course will be fun for students, but it will also be challenging. “It’s hard work going through verses and analyzing the grammar, using software to measure the vowels. This is the work of a linguist,” he says. 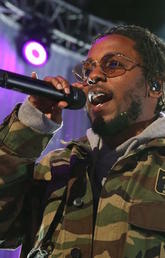 White people should never rap the n-word: A linguist breaks it down