The Class of 2023 hails from every Canadian province and territory except Nunavut. Riley Brandt, University of Calgary

More than 7,000 new undergraduate students were welcomed to campus yesterday in a foot- stomping, flag-waving and a little trash-talking Induction Ceremony in the Jack Simpson Gym. The students — who come from 109 countries — wore their faculty’s colours in the boisterous hour that included inspirational speeches as well as some statistics.

The most common surname among the 7,225 new students is Nguyen and the most common first names are Sarah and Matthew. A lone Matthew stood up in the sea of Arts red, his arm raised and head down, to acknowledge the honour.

The youngest incoming student is 16 and the oldest, 84. The student who travelled the farthest — some 16,500 kilometres from Mauritius in the Indian Ocean — gave a big wave in her blue Haskayne T-shirt. The class of 2023 are from every Canadian province and territory except Nunavut, “but we’re working on that,” says Dr. Susan Barker, the collector of the stats, emcee of the event, and vice-provost (student experience).

She invited the deans to stand one by one in their academic dress and greet their new undergraduates. Students in green T-shirts (Kinesiology’s lime and Health Sciences’ kelly) responded to their deans with chants, horns, drums and flag waving, which caused some ribbing from Barker: “I see there’s been a little bit of coaching.”

In his first induction speech as university president and vice-chancellor, Dr. Edward McCauley started with a shout out to his home faculty of Science (donned in yellow) before suggesting the students consider the university community their family. “We encourage each other to achieve ambitious goals and we support and care for each other when we face challenges,” he says. “We are a global hub where bright minds come together to create new ideas and solutions.” McCauley encouraged the students to take advantage of the many undergraduate research and leadership opportunities on campus.

That’s what Rahul Arora did during his undergraduate years in Health Sciences. Arora, who is moving to Oxford next month as Calgary’s 16th Rhodes Scholar, told the “future scientists, artists, educators, engineers, CEOs and change-makers” that UCalgary is a meritocracy that welcomes interdisciplinary study. “There’s real power to be able to bridge disciplines and bring a fresh eye to existing challenges and be the person who can be versatile in our ever-changing, evolving world,” he says. “As a UCalgary student you are really well positioned to do this.”

The chancellor, Deborah Yedlin, suggested students think like entrepreneurs. “It’s taking initiative, exchanging knowledge across disciplines, being resourceful and learning from experience … being willing to push beyond your boundaries and be unafraid to fail.” Yedlin ended her comments with advice she received from her parents. Her mother, a professor, would remind her that faculty “don’t have horns” and to talk to them. Her father would say, “festina lente,” Latin for "make haste slowly."

That comment resonated with Arts student, Stephanie Mekhail. “I really liked the advice about living slowly. I think we should all enjoy our time here,” she said as students began to file out to the President’s Barbecue. “There was a lot of good advice,” says Science student Kaelin Good. He liked the suggestions to get to know lots of people. “Finding a supportive group of people you can trust and rely on and that way you can bounce ideas off — that to me is finding a safe space.”

And Helen Zhang, in her Schulich School of Engineering orange T-shirt, was excited to hear about prospects for research. “A lot of things you think are only accessible to grad students but there’s a lot of opportunity for undergrad studies and research,” she says. “It seemed really interesting to learn everything people can do in their undergrad years. It was interesting — and kind of scary too.” 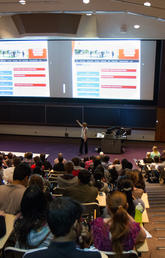 Where do our international students come from? China, Iran, India… 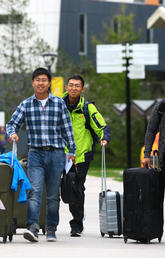 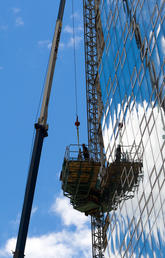 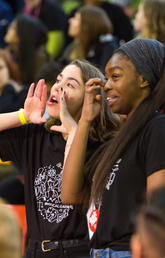