Natural defences in trees may be attracting mountain pine beetles

As the mountain pine beetle season gets into full swing, researchers at the University of Calgary are trying to figure out what makes the insect tick.

The current mountain pine beetle outbreak started in British Columbia in the early 1990s and crossed into Alberta in 2006 causing serious impact on commercial lodgepole pine. Recently, the insect has been spreading further east and north, now almost reaching the 60th parallel.

While the outbreak is waning in B.C., here, impact has been most visible around Jasper and West-Central Alberta, where researchers are seeing healthy populations of mountain pine beetles.

The damages on lodgepole pine are not only due to the pine beetle itself, but also because of the “hitchhikers” it carries on its back. One of them is the blue stain fungus.

“The blue stain fungus debilitates the pine tree,” says Haydeé Peralta-Vázquez, a PhD candidate who studies the biotic interaction between pine beetles and its phoretic mites in the Department of Biological Sciences. The fungus also stains the wood blue, which makes it lose its value. “It’s a big concern." 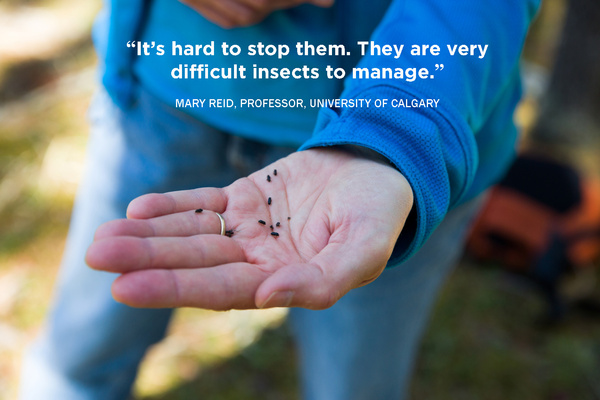 Climate change has seemingly helped the the geographic progression of the insect while also changing its behaviour.

“Instead of attacking weak or sick trees, climate change has contributed to outbreak behaviours. Now, the beetle is attacking healthy trees. Trees that are in very good condition, and they do it massively, along with the blue stain fungus,” she says.

Peralta-Vázquez works in the group of Mary Reid, professor in the Biological Sciences & Environmental Science Program. Reid’s research is focused on the interaction between bark beetles (which the pine beetle is part of) and trees.

“It’s hard to stop them. They are very difficult insects to manage. You can’t spray for them. They are hard to deal with. Now that they have breached the Rockies, there is nothing really to keep them from going across Canada,” says Reid.

It takes a sustained cold snap to affect the pine beetle population as the insect is “built” for Canadian winters. “(They) are used to freezing and they have anti-freeze in them that allows them to overwinter,” says Reid. 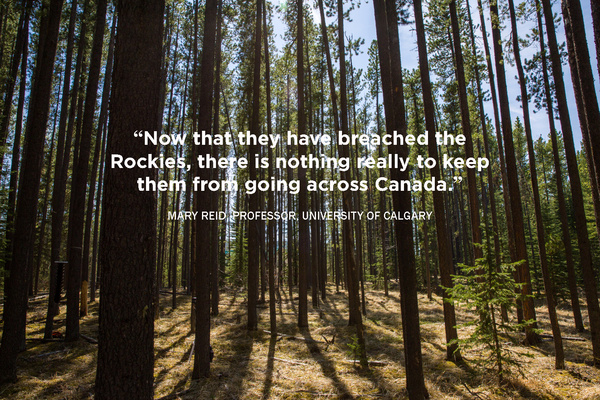 The province hasn’t released its population count for the year which will show how many of the insects survived the winter, but the mild conditions leave researchers expecting a strong survival rate.

The last line of defence is in the trees themselves. They secrete monoterpenes, toxic chemicals that should protect them against the insect. The problem is that pine beetles are attracted to the smell of these defences, so much so that monoterpenes are used to bait beetles when researchers want to catch them.

“Our work is showing … that the trees that get attacked are the ones that actually have more defences, which I think is because these are trees that are more apparent to the beetles. They can smell them and detect them as a suitable place to breed,” says Reid.

The economic impact on the forestry industry is undeniable — 723 million cubic metres of timber have been killed in British Columbia since the beginning of the outbreak. However, Reid doesn’t believe that the ecological impact will be as drastic, which might be the silver lining in this pine beetle outbreak.

“In fact, there is quite a lot of forest left. The ground is all intact. All the shrubs are still there, a lot of small trees," she says. "All the smaller trees, now that the canopy trees are gone, will often … start growing a lot faster now that they have more access to light, nutrients and water.” 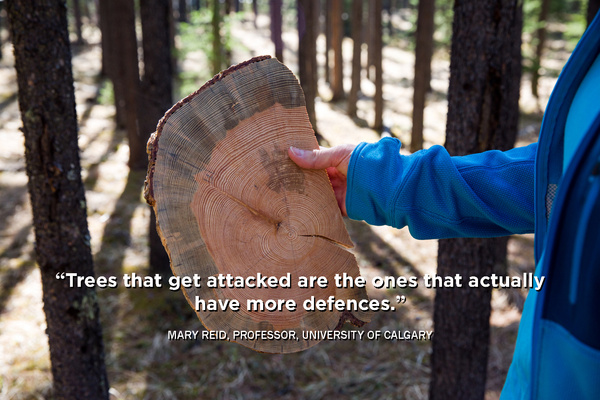