Entrepreneurs, inventors and innovators – six outstanding alumni are being celebrated as part of the Schulich School of Engineering’s second annual alumni awards. The winners were honoured on April 25, 2019 for their leadership, service to community and career accomplishments.

Find out more about these outstanding engineers making a difference in the world.

After graduating with a degree in Geomatics Engineering in 2011, Alex Filstein was recruited straight out of school by Cenovus. Alex is now Subsurface technology developer at Cenovus, testing new recovery schemes and optimizations to produce oil while advancing value creation and environmental performance.

He recently presented at the Solvent Leadership Series, an Alberta Innovates forum, to an audience of Canada’s major oil producers. He also finds satisfaction in helping junior engineers and students achieve their goals.

His distinct technical achievements include: inventing SDP (Solvent Driven Process), delivering it to field demonstration under 2 years and getting $2 million of backing from Alberta Innovates and $7.525 million from NRCAN to demonstrate the technology.

For the last four years, Alex has been involved in SAIT Petroleum Technology’s Capstone Project. Alex’s expertise makes him a valuable resource and mentor within Cenovus and across the industry.

Nannette Ho-Covernton has been a practicing professional engineer for over thirty years. She spent eight years in the Engineering, Procurement and Construction (EPC) community as a project engineer before joining Spartan Controls in 1995. For more than 20 years, Nannette has progressed her career from inside

Nannette is passionate advocate for the Schulich School of Engineering and the engineering profession through her engagement with Schulich's Engineering Career Centre Advisory Council. She is an Engineers Canada Fellow (FEC), recognized for her dedication to APEGA for more than 10 years.

Nannette has campaigned to increase the critical mass of women at Spartan Controls, especially technical females, to ensure there is diversity of thought within the technical community. She has been an active mentor for both women and men, sponsoring many emerging leaders in their career progression.

She and her family enjoy being active and involved in the community.

Audrey served as a distinguished lecturer with the Society of Petroleum Engineers in 2010/2011. She is a member of the Schulich Industry Engineering Advisory Council and currently chairs the Canadian federal government clean technology strategy table.

Audrey was the recipient of the Ernst & Young Entrepreneur of the Year 2011 Prairies Award for Cleantech and Environmental Services and received a national citation for Values-Based Innovation. She was chosen by Business in Calgary as a 2014 Leaders of Tomorrow, is a 2014 Board Diversity 50 cohort and one of Canada’s 2017 Clean50. Audrey is a fellow of the Energy Futures Lab, co-chairs the Governor General’s Innovation Awards assessment committee and Questor was recently recognized by the Cleantech Innovation exchange (CIX) as one of the Top 10 Most Innovative Cleantech Canadian Companies.

Audrey has had the vision to use her engineering background to advance the development of clean technology. Because of her passion for the environment, she knew the work Questor was doing was important.

Olivia Norton is the Chief Technical Officer of a company with one of the most relevant, ambitious, and controversial mission statements imaginable: To build synthetic humans nearly indistinguishable from us.

In January 2018, at 29 years old, Olivia Norton co-founded Sanctuary AI, an artificial intelligence company whose mission is to build robots with human-like intelligence. Sanctuary AI was born from Kindred System’s Inc., where she worked in their artificial general intelligence division, and explored the development of AI systems that could understand and participate in our world.

Olivia was named as a top 30 under 30 for BC Business, and volunteers for the Vancouver hub of Global Shapers: A global network of young people under the age of 30 working together to address local, regional and global challenges.

Olivia loves the challenge of working for a startup: she enjoys having many different tasks in diverse areas, being able to pick things up in the finance side, the marketing side, and the networking side. In the startup space, goals and timelines change rapidly, and Olivia has learned to embrace and create opportunities from these unique challenges.

Through her actions, Olivia teaches us not to shy away from wicked, ill-defined, and controversial problems. She shows us that even when there is no obvious answer, the solution is to move forward one step at a time.

Tushar Sharma received his Ph.D. degree from the University of Calgary in 2018. In 2016 and 2017, He was a Research and Development RF Engineer with NXP Semiconductors, Chandler, AZ, USA, where he was involved in the gallium nitride technology evaluation and power amplifier design for 5G base-station applications.

He is currently a Post-Doctoral Research Associate at Princeton University, Princeton, NJ, USA and will be joining as assistant professor at Indian Institute of Technology, Bombay. He has authored or co-authored over 25 refereed publications and has 2 pending U.S. patents. His current research interests include high-efficiency broadband RF/millimeter-wave power amplifiers, waveform engineering techniques, and active/passive load–pull techniques.

Pat Carlson is a chemical engineer by training. He started working in the oil and gas business as a petroleum reservoir engineer for BP Exploration Canada Ltd. in 1975. From 1975 until 1998 Pat served four Canadian oil and gas developers in various engineering and management capacities.

In 1998, Pat, with various partners, began building start-up oil and gas developing companies: Passage Energy Inc; Krang Energy Inc.; North American Oil Sands Corporation; and Seven Generations Energy Ltd. Pat retired as CEO of Seven Generations in June 2017 but remained on its Board of Directors until May 2018. Pat recently agreed to serve as a director of Nauticol Energy, a private, Calgary-based petrochemical manufacturer. Pat, as a member of a team of entrepreneurs, is presently engaged in building a company with the objective of developing new markets for Canadian natural gas via electrical power generation, petrochemical manufacture and LNG export and vertically integrating into development of natural gas resources.

Pat was inducted into the Canadian Petroleum Hall of Fame on November 23, 2018. He was awarded the Resource Leadership Award (2017) by the Alberta Chamber of Resources, Business Citizen of the Year (2016) by the Grande Prairie Chamber of Commerce, the Canadian Engineering Leader Award by the Schulich School of Engineering (2013), Oilman of the Year by the Lloydminster Oilfield Technical Society (2008) and was twice honoured by the Ernst & Young Entrepreneur of the Year Awards, as a Regional, sector finalist for North American Oil Sands and as Regional sector winner for Seven Generations.

Pat participated in the Schulich Industry Advisory Council, an advisory board for the Schulich School of Engineering, for several years. Pat served as a committee chairman for the Canadian Heavy Oil Association and as Co-chairman of Canadian Association of Petroleum Producers’ Environmental Research Advisory Committee. Pat was co-founder of the Lloydminster and District Heavy Oil Section of the Petroleum Society (now part of the Society of Petroleum Engineers).

Pat served the Government of Alberta as a technical expert for the natural gas team in the 2015 Alberta Royalty Review and he is presently serving the Government of Canada on the Sustainable Economic Development Table for Resources for the Future. Pat served briefly (2007 – 2009) as Honorary Consul for Sweden in Southern Alberta. In addition to Seven Generations, Pat has served as a director of several Canadian companies. He has received corporate director certification (ICD.D) from the Canadian Institute of Corporate Directors and Professional Engineer (P.Eng.) certification from the Association of Professional Engineers and Geoscientists of Alberta.

Pat and his wife, Connie, support the Banff Centre, the University of Calgary’s Schulich School of Engineering and a program in Attention Deficit Disorder with the Faculty of Education at the University of Calgary. Passionate environmentalists, Connie and Pat have recently contributed through the Pembina Institute to the Alberta Narratives Project, a project aimed at facilitating dialogue among Albertans on the subject of climate change.

Are you an outstanding engineering alumni? Let us know what you are doing with your degree and you might appear in our Alumni Spotlight. 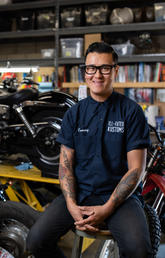 Class of 2018: Schulich grad an avid problem-solver in the lab and the community