Class of 2018: Schulich grad an avid problem-solver in the lab and the community

Whether he’s working with a semiconductor company to improve transistor efficiency, launching a telescope-building project in Siksika or helping bring free Wi-Fi to the Maskwacis reserve, the through line in Tushar Sharma’s impressive list of accomplishments is a determination to apply his considerable knowledge and energy to real-world problems.

“It’s not about just finding solutions,” says Sharma, who convocates June 5 with a PhD in electrical and computer engineering. “It’s about finding the right problem to work on so your work has a focus and a purpose.”

A Killam scholar, Sharma researches the design of high-efficiency bandwidth power amplifiers for next generation (5G) wireless radio transmitters. His work has earned him multiple awards and scholarships and been published in several top-tier journals. He’s drawn attention from industry, resulting in a Transformative Talent Internship with NXP semiconductors in Arizona.

“I was always interested in doing a different type of PhD, not wanting to sit in a lab publishing, that was never my aim,” Sharma says. At NXP he worked on a team delivering a state-of-the-art project. Sharma says the support of his graduate supervisor Fadhel Ghannouchi was key in reaching his goals.

“What Tushar is doing from an academic perspective is pushing the boundaries of research and knowledge in his area,” says Ghannoushi, professor in electrical and computer engineering and Tier 1 Canada Research Chair in Green Radio Systems and Strategic AITF / CORE Chair in Intelligent RF Radio Technology. “Working on real-world problems has certainly shaped his research focus.”

Ghannouchi also says Sharma always wants to do more, to help others as a colleague, a TA, training students or collaborating with peers.

For Sharma, clearly helping out and building community extends well beyond the lab. He was initially very homesick after moving to Calgary from Delhi, India, in 2013, finding life here demanding, alien and isolating. What helped, he says, was getting involved in groups on campus.

As a graduate student at the university’s iRadio Lab he earned recognition from NASA for his efforts developing and promoting radio astronomy, reaching out to students in both India and Canada. He joined the Southern Alberta chapter of IEEE (Institute of Electrical and Electronics Engineers), and was named their top young achiever in 2015.

“That gave me the opportunity to meet people all over Southern Alberta and I started feeling part of a community at large,” Sharma says.

One community outreach initiative started simply enough with a trip to Siksika Nation east of Calgary to sort donated clothes after the 2013 floods. It led to a full-blown astronomy project, supported by Sharma and the IEEE, and to the creation of the Astronomy Teacher Training Institute with educator Bruce Rout, for which Sharma was named an ASTech Award finalist in 2017.

Rout now works full time on a telescope-building project at Siksika, promoting the use of astronomy to teach science and the humanities at Siksika Nation High School.

Building on Blackfoot people’s history of studying astronomy that extends back tens of thousands of years, Rout is working with junior high and high school students there to build a 10-foot computer-controlled telescope with a 24-inch mirror in a building with a roll-off roof.

“Tushar is one of those people who looks at how to get things done,” Rout says. “One time he was out to work on the radio science project, and there must have been 120 kids around him, and he’s demonstrating numerous scientific experiments. He’s an amazing, outstanding man.”

Deeply affected by the digital divide and the disparity in Internet access he has witnessed first-hand on First Nations reserves, Sharma reached out to Bruce Buffalo after seeing a highly compelling video on YouTube about Buffalo’s work installing free WiFi on the reserve.

“IEEE were looking to get involved in another project benefiting First Nations,” Sharma says. “We worked together and donated money, and we in turn bought some equipment for Bruce’s project.”

Led by Buffalo, the IEEE Special Interest Group on Humanitarian Technology (SIGHT) team involved includes Sharma, David Garrett and Anis Ben Arfi. They are now planning to spin off a not-for-profit organization Mamawapowin — which is Cree for the act of coming together —with the goal to bridge the digital divide in rural Alberta.

Buffalo and Sharma collaborated this past April on an event at the University of Calgary on fighting Canada’s digital divide. “Tushar is always looking for ways to make something better,” says Buffalo, a trained carpenter and self-taught engineer who started Maskwacis Fibre from his home.

Recognized this year with the GSA Leadership Award, Sharma is, as always, unafraid of aiming high, deeply committed to helping others and focused on solving problems.

“If we have the right solution, it could work in other rural areas and for different reserves in Canada,” he says. 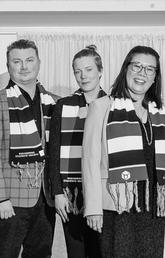 In the News: CBC The Homestretch (audio)