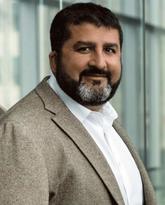 As a teacher he is an active part of the largest enterprise that much of humanity is actively involved in: Education. He is on a mission through his teaching work and through the Resourceful Human Project to figure out how we can better educate people for an uncertain future.

As Curator of TEDxCalgary since 2009 he has made it his mission to emphasize the role of civil society in Calgary, by convening people around ideas that matter.

Rahim holds a Bachelor of Science and a Bachelor of Education from the University of Calgary. Rahim, you can find him on Twitter at @rahimsajan.