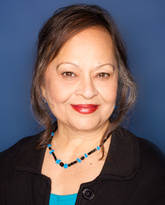 Jayashree Thatte Bhat received a Master's degree in Clinical Biochemistry from York University of Toronto, and then joined the Medical Research Team as a Jr. Scientist, eventually moving to Calgary, and working in Medical Research Centre of U of C, in 1979. After working for 27 years as a medical researcher, technical writer and computer analyst in various companies including oil industry, she took an early retirement, when she received the Senior Performing Arts Scholarship of the Shastri Indo-Canadian Institute. She utilized this scholarship to go to India to study as a full time student; and received Master's and PhD degrees in Classical Music of India from the SNDT and Nagpur Universities, respectively.

While in India, Jayashree started the project of ‘Breast Cancer Awareness’ in the province of Maharashtra, and opened a centre for this work in Pune; and after 16 years of hard work, with the help of local doctors and nurses, there are SEVEN Centres in total all over Maharashtra, doing this noble work. Literally thousands of women have been made aware of and educated in this field. The work is focussed mainly on families from small towns and villages of India.  For this CROSS-CULTURAL WORK, the Government of Alberta honoured her with the "ALBERTA CENTENNIAL GOLD MEDAL" in 2005.

She has published SEVEN books, FOUR books in Marathi language, based on scientific knowledge; and THREE books in English; one on classical music (which is used in many universities as a course material for Classical music of India), one  on breast cancer and one on Indian immigrants settled in Canada in the 1970s era.  In music field, she is a performer, as well as a designated Visiting Professor of Indian Music in many Canadian, American and European Universities.

In April of 2013, she was appointed as a member of the Board of Directors for Canadian Race Relations Foundation by the Governor in Council for a term of three years. The same year, she was also appointed as Director on the Board for Immigrant Services Calgary, a Settlement Agency for new immigrants, for a term of three years. She is currently serving on the Board of the Rocky Mountain Civil Liberties Association as a member.

Jayashree founded the Performing Arts Section of the School of Indian Languages and Performing Arts (SILPA), geared for the children of immigrants from India, and served as the Director for ten years. She has been a dedicated volunteer at the Hindu Society of Calgary and served as a member of the Board of Trustees for three years, after serving as a Cultural Vice President for five years.

Jayashree has pioneered the Hindu Group at the Faith and Spirituality Centre at the University of Calgary, and is currently serving as the Chairperson of the Hindu Advisory Committee.

Married with two children and five grandchildren, Jayashree is grateful for her family support. She warmly welcomes the opportunity to contribute to the University of Calgary as a Senator.